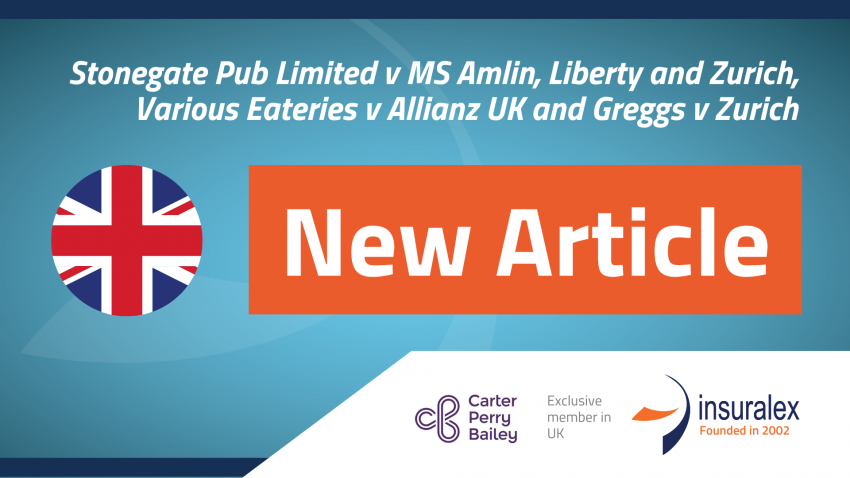 The Commercial Court has handed down its judgment in the three related trials (Stonegate Pub Limited v MS Amlin, Liberty and Zurich (“the Stonegate Insurers”), Various Eateries v Allianz UK and Greggs v Zurich) in respect of business interruption claims arising out of the Covid-19 pandemic.

Background to the litigation

As the claims being made in each trial were all in respect of the same Marsh Resilience MD/B1 v1.1 form (“the Marsh Resilience Wording”), the Court ordered successive trials of the common or overlapping issues. Each trial was heard separately with the parties represented by different legal teams. There was considerable overlap of the evidence, agreed facts and arguments put forward by each side. Our summary below focuses mainly on the Stonegate judgement in which all the issues were considered. There were slightly different issues in the Greggs and Various Eateries trials (largely due to different policy periods) and we recommend each of the judgments be read in full to understand their implications.

The litigation proceeded by way of determination of the following preliminary issues.

1. Trigger – what was the ‘trigger’ under the Insuring Clauses?

2. Aggregation – whether the claimed losses could be aggregated to a single ‘occurrence’ or ‘occurrences’.

3. Causation – were the losses caused by Covered Events in the relevant Policy Periods?

4. Additional Increased Cost of Working (“AICW”) – a) Did the AICW sub-limit apply to each Single Business Interruption loss (“SBIL”) or in the aggregate, and b) Did the AICW apply to economic and non-economic Increased Cost of Working (“ICW”)? 5. Government Assistance – should the Furlough payments and Business Rates Relief received by policyholders be taken into consideration when calculating the indemnity under the policy?

The Court was unwilling to define what constituted a ‘trigger’, which it considered a colloquial term that was not directly referred to in the policy. It rejected Stonegate’s arguments that any ‘trigger’ would then be multiplied by the number of insured premises (760 in Stonegate’s case). It also rejected the argument that an insured location could have multiple ‘triggers’ where a premises remained closed and that closure was reinforced by the reiteration or continuation of similar regulations.

Although the Court agreed with the Stonegate Insurers that the knowledge in March / April 2020 that there had been a transfer of the virus to the human population on a number of occasions over a short period could constitute an ‘occurrence’, this was too remote from the losses to be an aggregating provision.

It also rejected Stonegate’s argument that the aggregation clause could apply to the millions of individual Covid-19 cases simply because the Supreme Court had concluded in the FCA Test Case (our article on the FCA Test Case can be found here) that each case was a concurrent proximate cause of the government’s actions in response to the pandemic.

The Court agreed with the Stonegate Insurers’ alternative argument that there was one ‘single occurrence’ or a few ‘single occurrences’ in the government response to the pandemic in the period after 16 March 2020. The decision taken at the COBR meeting on 16 March 2020 that the public should be advised to avoid pubs, restaurants and clubs, and the announcement on 20 March 2020 that they should then close, constituted a number of occurrences in quick succession.

The implication of this finding was significant, as it meant that Stonegate’s losses would be aggregated per occurrence, meaning they would be capped at the £2.5m limit.

The Court also rejected Stongate’s argument that the occurrences should be viewed by reference to each insured location (thereby creating a £2.5m limit per premises). The Court concluded that the ‘occurrence’ was to be determined from the perspective of Stonegate as a policyholder operating pubs across the country rather than as an operator of any single venue.

Stonegate argued that all losses in the period up to the end of the 36-month indemnity period (policy expiry being April 2023) were covered events. The Court rejected the argument that each of the Covid-19 cases was of equal causative effect and considered this to be a fundamental misunderstanding and misapplication of the decisions in the FCA Test Case. Stonegate’s alternative argument that ‘cases make cases’ and the later cases of Covid-19 would not have occurred but-for the earlier cases, was considered by the Court to be ‘ingenious’, but unsound, and would effectively be replacing the contractually agreed causation test with a ‘but-for’ causation, which was not what the parties had agreed.

The Court concluded that (save for a few limited categories set out in paragraph 229 of the Stonegate Judgment), the cases of Covid-19 which constituted covered events concluded on 4 July 2020 (in England, 6 July 2020 in Scotland and 13 July 2020 in Wales) when venues first began to reopen. After that, the government actions were in response to more recent cases or the threat of future cases.

The Marsh Resilience Wording contained a £15m sub-limit for AICW. The Court agreed with Stonegate that this sub-limit applies for each SBIL and not, as the Stonegate Insurers had argued, in the aggregate. Stonegate Insurers had contended that £15m per SBIL was generous when compared against the SBIL limit of £2.5m. The Court found, however, that AICW also applied to other aspects of cover in the policy (such as property damage) where the SBIL limit was £2.5 billion. In this context, £15m was only a small proportion of the total cover. Further, the parties could have, but did not, specify different sub-limits depending on the insuring clause. On the related point of whether the AICW applies to ICW (as defined in the policy), the Court agreed with the Stonegate Insurers’ analysis that AICW was limited to non-economic losses (i.e not those losses which were incurred in order to avoid reducing turnover) only. The result of this finding is that any losses which were economic will fall within the £2.5m SBIL limit and not the £15m AICW limit.

The Court concluded that Furlough and Business Rates Relief payments received by businesses during the pandemic should be taken into account when calculating the sums recoverable under the policy. Both on the wording of the policy, and as a matter of law, the businesses would be receiving more than an indemnity if these payments were not deducted. Such payments reduced the costs payable out of Turnover (as defined in the policy) and should be taken into account under the savings clause.

As the Court found in favour of both insurers and policyholders on different issues, the reporting of which party succeeded in this matter has been mixed. However, while Stonegate, Greggs and Various Eateries succeeded in some of their arguments, such as the aggregation of AICW losses, the Court found largely in favour of insurers in respect of many of the key issues. The result of these findings is that the claims brought by Stonegate, Greggs and Various Eateries will now be reduced to only a fraction of the £1.1 billion (in Stonegate’s case) that was originally claimed. Following the relative disappointment of the Supreme Court’s findings in the FCA Test Case, insurers will be relieved that, on issues of aggregation and causation, where there are large operators with multiple premises, those losses will (in relation to the Marsh Resilience Wording at least) be limited. Given the extent of the analysis undertaken by the Court as to the virology and epidemiology underlying the Covid outbreak, coupled with the detailed exploration of both the trigger and aggregation aspects, it is to be hoped that the decision will operate as guidance for both insurers and policyholders to resolve large numbers of outstanding BI/Covid related claims.