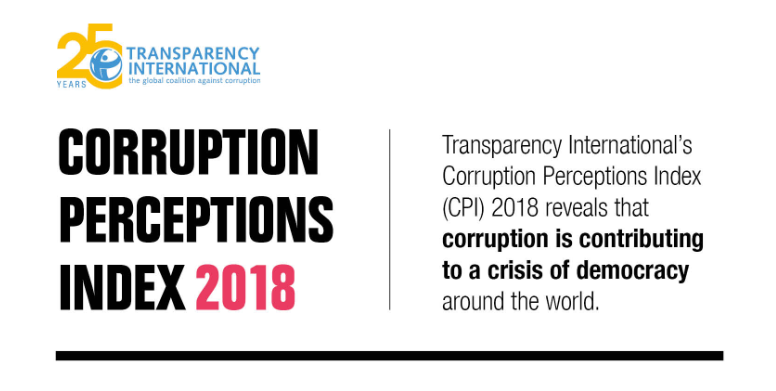 According to the 2018 Corruption Perceptions Index “Brazil dropped two points since last year to 35, also earning its lowest CPI score in seven years”, since 2012 Chile has significantly declined and Argentina has improved.

The 2018 Corruption Perceptions Index (CPI) released by Transparency International reveals that the continued failure of most countries to significantly control corruption is contributing to a crisis of democracy around the world.

“With many democratic institutions under threat across the globe – often by leaders with authoritarian or populist tendencies – we need to do more to strengthen checks and balances and protect citizens’ rights,” said Patricia Moreira, Managing Director of Transparency International. “Corruption chips away at democracy to produce a vicious cycle, where corruption undermines democratic institutions and, in turn, weak institutions are less able to control corruption.”

The 2018 CPI draws on 13 surveys and expert assessments to measure public sector corruption in 180 countries and territories, giving each a score from zero (highly corrupt) to 100 (very clean). To view the results, visit: www.transparency.org/cpi2018 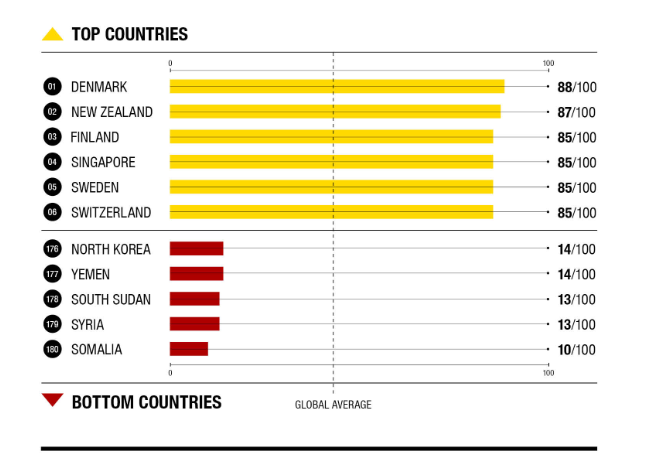 CORRUPTION AND THE CRISIS OF DEMOCRACY

Exemplifying this trend, the CPI scores forHungary and Turkey decreased by eight and nine points respectively over the last five years. At the same time, Turkey was downgraded from ‘partly free’ to ‘not free’, while Hungary registered its lowest score for political rights since the fall of communism in 1989. These ratings reflect the deterioration of rule of law and democratic institutions, as well as a rapidly shrinking space for civil society and independent media, in those countries.

More generally, countries with high levels of corruption can be dangerous places for political opponents. Practically all of the countries where political killings are ordered or condoned by the government are rated as highly corrupt on the CPI.

With a score of 71, the United States lost four points since last year, dropping out of the top 20 countries on the CPI for the first time since 2011. The low score comes at a time when the US is experiencing threats to its system of checks and balances as well as an erosion of ethical norms at the highest levels of power.

Brazil dropped two points since last year to 35, also earning its lowest CPI score in seven years. Alongside promises to end corruption, the country’s new president has made it clear that he will rule with a strong hand, threatening many of the democratic milestones achieved by the country. 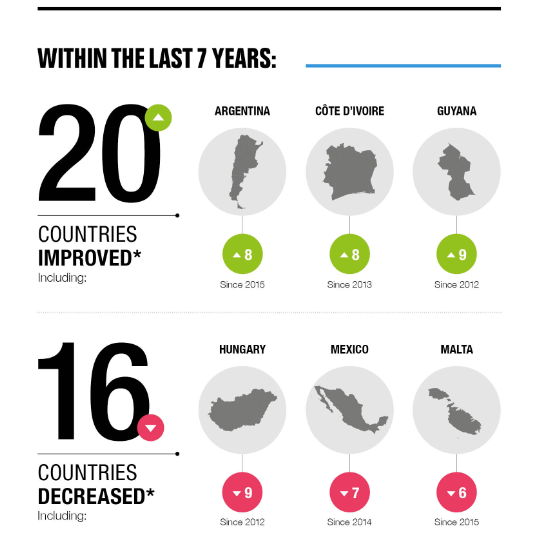 “Our research makes a clear link between having a healthy democracy and successfully fighting public sector corruption,” said Delia Ferreira Rubio, Chair of Transparency International. “Corruption is much more likely to flourish where democratic foundations are weak and, as we have seen in many countries, where undemocratic and populist politicians can use it to their advantage.”

To make real progress against corruption and strengthen democracy around the world, Transparency International calls on all governments to: 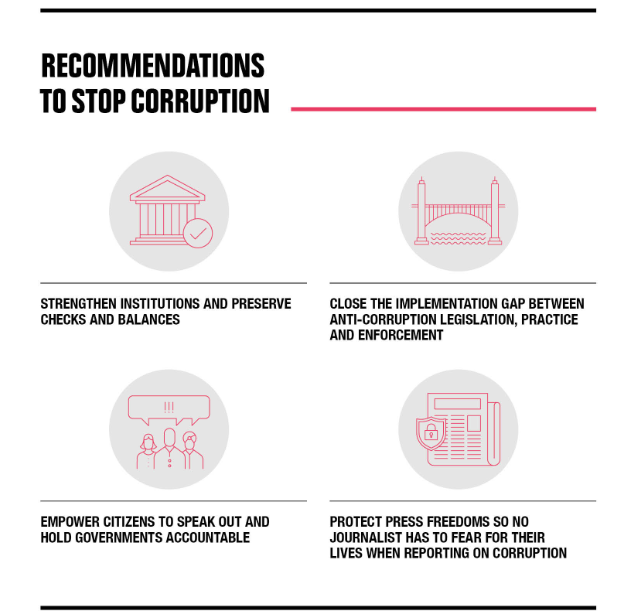 Our cross analysis of the 2018 Corruption Perceptions Index related to the global crisis of democracy incorporates data from the Democracy Index produced by The Economist Intelligence Unit, the Freedom in the World Index produced by Freedom House and the Annual Democracy Report produced by Varieties of Democracy (V-Dem).

Transparency International is the global civil society organisation leading the fight against corruption for the last 25 years. Join our efforts at transparency.org.

About the Corruption Perceptions Index

Since its inception in 1995, the Corruption Perceptions Index, Transparency International’s flagship research product, has become the leading global indicator of public sector corruption. The index offers an annual snapshot of the relative degree of corruption by ranking countries and territories from all over the globe. In 2012, Transparency International revised the methodology used to construct the index to allow for comparison of scores from one year to the next. For more information, visit www.transparency.org/research/cpi.