Home (re) Insurance Latin America Watch the 3 seminars: How the Lloyd’s Market Works? 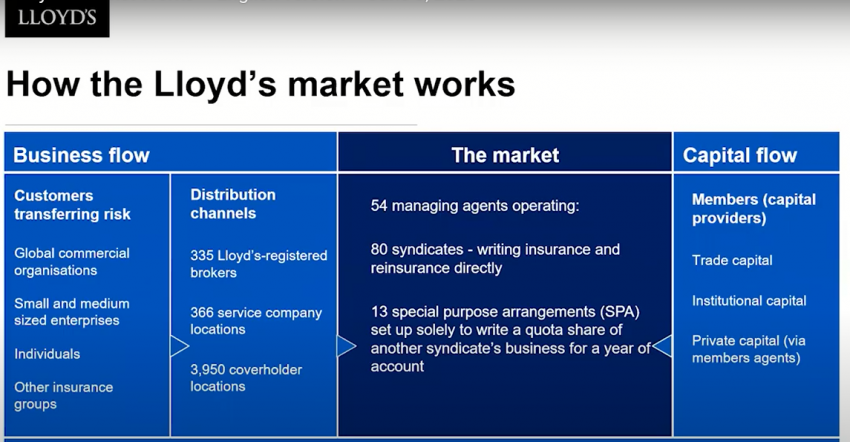 Over the last couple of weeks, Lloyd’s Regional Head for Latina America and the Caribbean Daniel Revilla and Lloyd’s Country Managers across the region delivered a seminar explaining “How the Lloyd’s Market Works”.

Please see the links to the webpages where the webinars can be accessed:

All versions (English, Portuguese, Spanish) are available in each country page above.

Lloyd’s is licensed by SUSEP (the Brazilian regulatory authority) as an Admitted Reinsurer with a representative office in Rio de Janeiro. All Lloyd’s Managing Agents can write reinsurance business from Brazil under the Lloyd’s license.

With a recognised coverholder model and strong support from our broker distribution network, Lloyd’s underwriters are amongst the largest reinsurers in the country. Our customers are the businesses who drive and serve the Mexican economy and they come to Lloyd’s to access the scale, diversity and financial strength of our specialist reinsurance market.

Lloyd’s first registered as a foreign insurer in 1999 and throughout the early part of the 21st century Colombia has become a key part of Lloyd’s growing presence in Latin America.

In 2015, Lloyd’s was granted permission to open a representative office in Colombia, allowing us to contribute valuable capability and expertise to both the local insurance market and Latin America.

The expert underwriters at Lloyd’s provide their Colombian customers with the same innovative insurance solutions, financial security and strong international ratings Lloyd’s has always been known for.

In the past two years, insurance growth has more than doubled the country’s average economic growth rates, and the outlook for the national insurance market remains positive.

Last year US$98mn worth of premiums was written in Colombia with catastrophe and facultative reinsurance business the strongest classes alongside property lines including power generation, engineering and aviation.

However, with insurance penetration at only 1.6%, businesses and communities throughout Colombia remain vulnerable to global economic uncertainty, political instability and natural catastrophes including floods, earthquakes and fires.

Economic and domestic conditions are providing Colombia with the opportunity to work toward strong and sustainable growth.