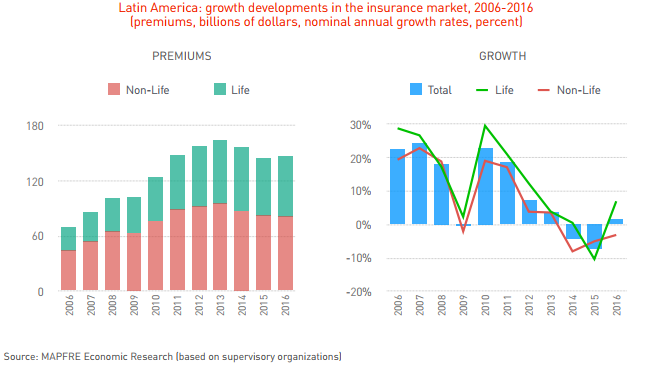 An analysis of the determining factors of insurance penetration levels.

The insurance penetration index, beyond the quantitative relationship that associates insurance premiums with the gross domestic product of a country, is an indicator of the way in which a company uses insurance as a mechanism to give stability to economic and social activity through the protection and compensation of risks and as a tool to manage savings and promote of medium- and long-term investments.

Therefore, the penetration index should not be seen only as an indicator of the relative size of the insurance industry in an economy, but also, and more importantly, as the degree of intensity in which insurance contributes to creating wealth in a society.

The main goal of this report, promoted by the Inter-American Federation of Insurance Companies and prepared by MAPFRE Economic Research, is to analyze the main determinants of insurance penetration levels in Latin America, in order to outline general guidelines that can be considered when designing public policies aimed at increasing its penetration in the regional economies.

In order to do this, the conceptual framework used in the preparation of this report has focused on the analysis of the main factors that can promote an increase in penetration levels from the point of view both of supply (those that affect the creation of insurance services) and demand (those that explain the intensity of consumption of those services).

From this perspective, based on an analysis of the main experiences of the insurance markets in Latin America, this report analyzes the influence that the prudential regulatory framework, market and capital access mechanisms, distribution channels, expense efficiency level and facilities for innovation, have on the process of creating the supply of insurance services. And, in addition, it addresses the role of economic growth, income distribution structure, financial education, mandatory insurance, tax incentives, the insurance industry’s chances to participate in new areas, and financial inclusion policies in the behavior and expansion of insurance demand. Reviewing this group of factors facilitates not only a better understanding of the economic landscape in which the insurance activities are embedded, but also identification of the practices that have had the most positive effects on raising insurance penetration levels in the region. Consequently, they should be taken into account when designing and implementing public policies that seek to promote better use of insurance mechanisms in society.

With the publication of this report, we would like to continue contributing to the analysis of Latin American insurance markets and, therefore, to expand the scope of this activity in the society, increasing its contribution to wealth creation and increased quality of life in the region.

Download the report: Elements for insurance expansion in Latin America

Synthesis of the structural trends in the Latin American insurance market

Globally, 2016 represented a turning point for the economic outlook, marked by a nascent pick up in the global economy. Global economic activity grew this year by around 3.1 percent, slightly above the previous year. Developed economies grew by 1.9 percent, while emerging economies expanded by 4.6 percent. These developments testify to the change of cycle in both regions of the world, against a backdrop of an economic policy stance which is gradually shifting away from easy monetary policy toward a looser fiscal policy stance.

The pace of global activity was uneven not only in terms of developed and emerging economies, but also between the different regions, with stronger momentum in south-east Asia relative to Latin America and emerging Europe. In Latin America, although confidence indicators began to recover in the second half of the year, especially for consumption and employment, leading indicators nonetheless remained sluggish at the end of 2016, foreshadowing a negative out-turn for the region as a whole.

The Latin American economy contracted by -1.2 percent over 2016 (-2.9 percent including Venezuela); strongly affected by recessions in Brazil and Argentina.