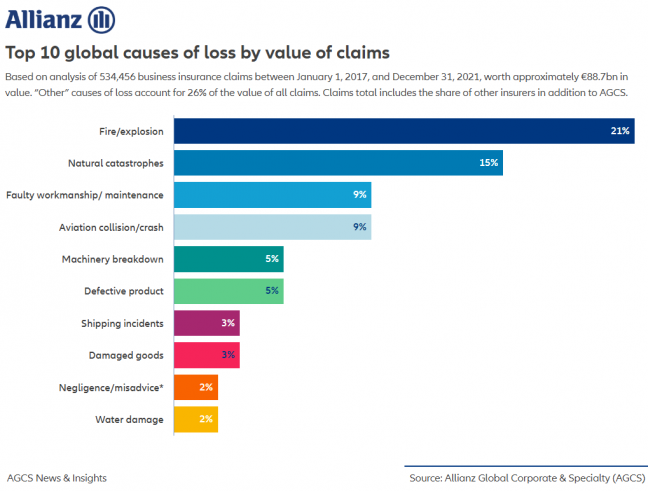 A fire at a busy warehouse leaves a company struggling to replace its buffer stock; a ransomware attack paralyzes a company’s IT systems; the use of industrial adhesives in manufacturing results in a costly product recall: every day companies around the globe, together with their insurers, experience losses, in multiple forms, in the millions of dollars. Over the past five years, fire and explosion, natural catastrophes and faulty workmanship or maintenance have been the major causes of loss by value of insurance claims, according to the Global Claims Review 2022 from Allianz Global Corporate & Specialty (AGCS).

“Insurance claims from companies have become more severe over the past five years due to factors such as higher property and asset values, more complex supply chains and the growing concentration of exposures in one location, such as in natural catastrophe-prone areas,” says AGCS Chief Claims Officer and Board Member Thomas Sepp. “The future does not look brighter anytime soon. Companies and their insurers have shown resilience to weather the loss impact of the pandemic, but the ongoing war in Ukraine, a spike in the cost and frequency of business interruption losses and the sustained elevated level of cyber claims are creating new challenges. At the same time, the top two causes of claims, fires and natural hazards, remain significant loss drivers for companies. Last but not least, the impact of soaring inflation around the world will bring further pressure on claims costs.”

Inflation puts undervaluation of assets in the spotlight

Ultimately, inflation brings pressure on claims costs from multiple angles. Property and construction insurance claims, in particular, are exposed to higher inflation, as rebuilds and repairs are linked to the cost of materials and labor, while shortages and longer delivery times inflate business interruption (BI) values. Other lines of insurance, such as directors and officers, professional indemnity and general liability, are also susceptible to inflationary pressures through rising legal defense costs and higher settlements.

“Replacement costs more and replacement takes longer, and this means both the property damage and the business interruption loss are likely to be significantly higher,” says Sepp. “Updating insured values for all new contracts is therefore a pressing concern for insurers, brokers and insureds. If this doesn’t happen, our clients run the risk of not being fully reimbursed in the event of a loss, while insurers run the risk of underpricing exposures. The insurance market has already seen a number of claims where there has been a significant gap between the insured’s declared value and the actual replacement value.” For example, in a claim for a commercial property destroyed in the 2021 Colorado wildfires, the rebuild value was almost twice the declared value, due to a combination of inflation, demand surge, and underinsurance.

An in-depth interview with Sepp on inflation and its impact on claims is available here.

What are the top causes of business insurance claims?

In one of the industry’s most comprehensive analyses, AGCS has identified the top causes of loss for companies from more than 530,000 insurance claims in over 200 countries and territories that it has been involved with between 2017 and 2021 (typically a number of insurers provide coverage jointly considering the huge values at stake in the corporate sector). These claims have an approximate value of €88.7bn, which means that the insurance companies involved have paid out – on average – over €48mn every day for five years to cover losses.

The analysis shows that almost 75% of financial losses arise from the top 10 causes of loss, while the top three causes account for close to half (45%) of the value. Despite improvements in risk management and fire prevention, fire/explosion (excluding wildfires) is the largest single identified cause of corporate insurance losses, accounting for 21% of the value of all claims. Fires have resulted in more than €18bn worth of insurance claims over five years, according to the analysis. Even the average claim totals around €1.5mn.

Natural catastrophes (15%) ranks as the second top cause of loss globally by value of claims. Collectively, the top five causes (based on more than 20,000 claims around the world) – hurricanes/tornados (29%); storm (19%); flood (14%); frost/ice/snow (9%) and earthquake/tsunami (6%) account for 77% of the value of all disaster claims. Hurricanes and tornados are the most expensive cause of loss, driven by the fact that two of the past five Atlantic hurricane seasons (2017 and 2021) now rank among the three most active and costliest on record, as well as recent record-breaking tornado activity. Insurers are also seeing new scenarios. During 2021, the ‘Texas Big Freeze’ in the US and flooding in Germany stood out as events that were both large but had unexpected claims. For example, the ‘Texas Big Freeze’ in February caused huge disruption to infrastructure and manufacturing, with many companies forced into shutdowns by widespread power outages, resulting in property damage and in some large contingent business interruption (CBI) losses. This event alone is estimated to have caused economic losses up to $150bn. 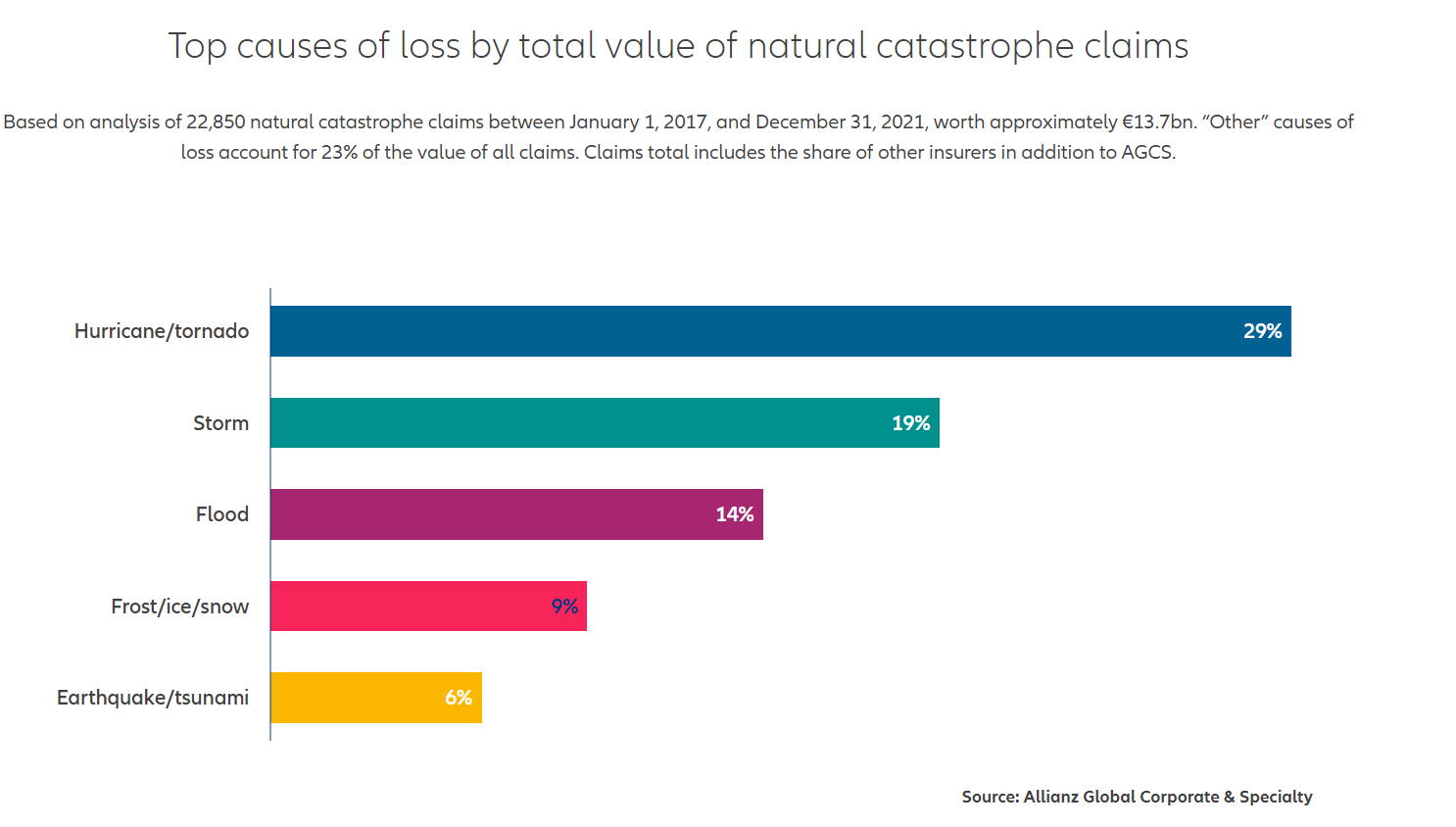 Faulty workmanship/maintenance incidents are the third top cause of loss overall (accounting for 9% by value) and are also the second most frequent driver of claims (accounting for 7% by number, ranking only behind damaged goods with 11%). Costly incidents can include collapse of building/structure/subsidence from faulty work, faulty manufacturing of products/components or incorrect design.

Business interruption losses on the rise

The number of CBI claims has increased year-on-year for the past five years, exemplifying the growing interdependence and complexity of corporate supply chains. The automotive industry alone has seen several CBI events during this period, with the overall growth in CBI claims exacerbated in the last two years by a large loss in the semi-conductor manufacturing sector and the ‘Texas Big Freeze’ event. The claims from these two events more than tripled the number of CBI claims in the previous three years.

While not appearing in the top 10 causes of loss, the number of cyber claims has significantly increased over the past few years, driven by the rise of threats such as ransomware attacks, but also reflecting the growth of cyber insurance. AGCS has been involved in more than 1,000 cyber claims in both 2020 and 2021, compared with fewer than 100 in 2016. Claims frequency has begun to stabilize however, albeit at elevated levels.

The Covid-19 legacy and the Ukraine crisis

The report also investigates the insurance impact of recent specific claims events such as the pandemic and the Ukraine crisis. Insured losses from Covid-19 are in excess of $40bn according to industry estimates, with the bulk of claims coming from event cancellation insurance and BI claims from companies affected by lockdowns. The pandemic has also had knock-on effects such as stressed supply chains, heightened inflation, and financial insolvencies.

Meanwhile, Russia’s invasion of Ukraine is likely to result in a significant, yet manageable, loss for the global insurance industry. Insurers exposure to the conflict are limited by war exclusions, which are standard in most property/casualty insurance contracts. Expected insured losses from the war in Ukraine are comparable with a mid-sized natural catastrophe, according to AGCS, but specialist markets like aviation insurance could yet suffer disproportionately.

Brazil: danger in water and fire

When considering the 7,405 corporate claims analyzed in Brazil between 2021 and 2021, the main loss-generating factors, by value, are Ship sinking/collision (29%) and Fire/explosion (25%). The top 5 of complete Brazilian Machinery breakdown (20%) and Defective products (5%).

“These more than 7,000 claims generated losses of 1.1 billion euros, of which more than half – even almost 2/3 if considered the machinery breakdowns – could have been avoided or mitigated with a good prevention plan, which includes personnel training, preventive maintenance and contingency planning. These are losses that impact, mainly, the supply chain, a sector that has been recovering from two very complicated years”, comments Rogerio Lopes, Regional Head of Claims AGCS Ibero/Latam. 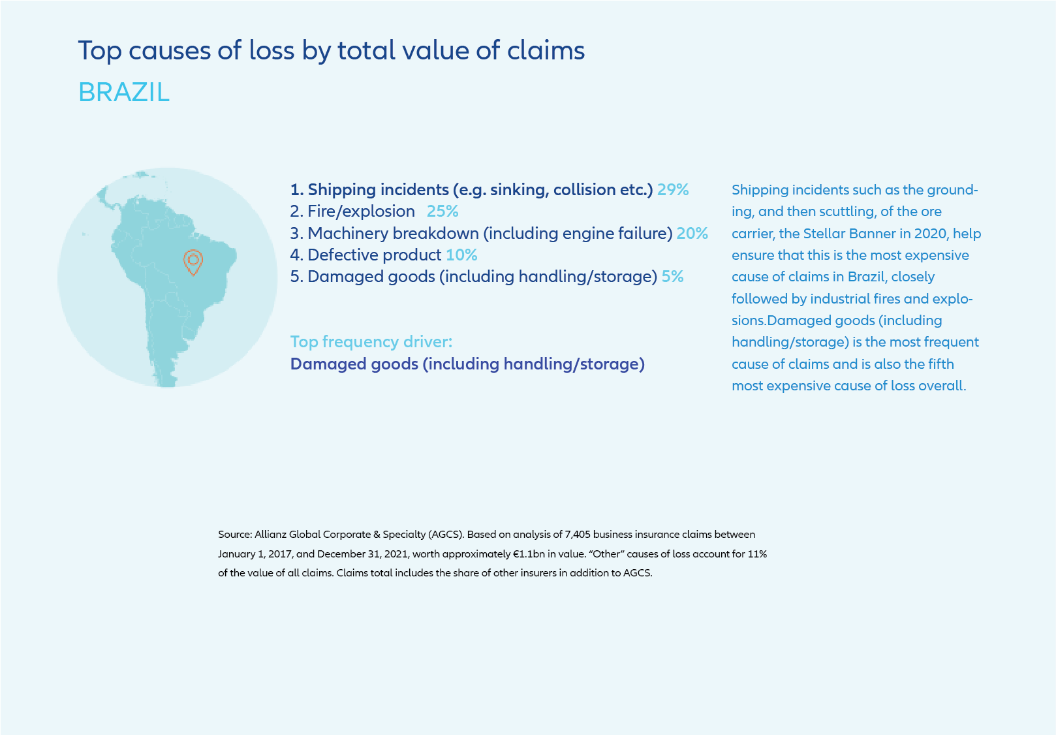 The report and further materials are available for download here.