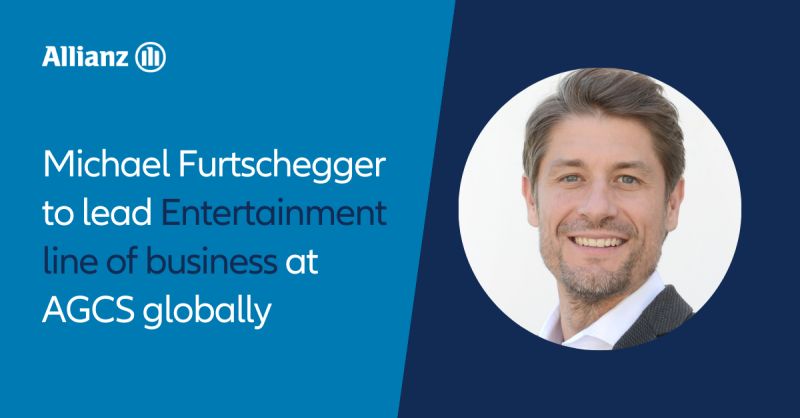 Effective immediately, Michael Furtschegger will be appointed as Global Head of Entertainment at Allianz Global Corporate & Specialty (AGCS), reporting directly to AGCS SE Board Member and Chief Underwriting Officer Specialty Dr. Renate Strasser. Based in Munich, Furtschegger has led the global Entertainment team since end of 2020 on an interim basis, after his predecessor Lauren Bailey had decided to step down from her role and leave Allianz. The AGCS Entertainment line of business provides specialized insurance solutions for film productions as well as live events in sports, music or culture.

AGCS Chief Underwriting Officer Specialty Renate Strasser says “With the ongoing Covid-19 pandemic, both the Entertainment industry as well as its insurers have gone through an extremely challenging time over the last year. Michael and the team in Underwriting and Claims have worked intensively to support our customers to mitigate losses and quickly settle any claims if coverage was confirmed. Together with the global entertainment industry, we hope that the post-pandemic new normal will soon realize so that this sector can build on earlier growth and vibrancy. I look forward to working with Michael and have every confidence that he will steer the team to a successful future and develop a sustainable Entertainment book of business for AGCS.”

Prior to the interim period leading the global team of 60 Entertainment colleagues around the globe, Furtschegger was the Head of Entertainment International since 2016, steering the international expansion of this business segment. He originally joined AGCS in 2009 as a Global Customer Relationship Manager before several other roles followed: He served as Executive Assistant to Dr. Axel Theis, founding and long-term CEO of AGCS, before taking over a role in the New York office as Quality & Projects Manager in the area of global underwriting coordination. He then served as the Head of Global Strategy & Development for the Chief Underwriting Office Specialty. Before joining Allianz in 2009, Furtschegger worked as a management consultant after his MBA (Mexico/USA) and Diploma studies in Business Management (Germany).

From Charlie Caplin to Covid-19

The Entertainment line became part of AGCS when the commercial insurance business of the North American Allianz entity Fireman’s Fund Insurance Company has been integrated into AGCS in 2015. Building on its established presence in Film & TV productions and live events in North America, Entertainment was expanding globally, establishing hubs in London, continental Europe and Asia-Pacific. From Charlie Chaplin to James Bond, Harry Potter and the recent Marvel superhero films, AGCS has insured thousands of Hollywood successes, independent productions, documentaries, commercials and television movies.

In 2020, Entertainment contributed 3 percent to AGCS’s global gross written premium of EUR 9,3 billion. Last year, AGCS as well as many other insurers, have seen a surge in Covid-19 driven claims in Entertainment, especially for the cancellation of live events and the disruption of movie or film productions due to governmental lockdowns and social distancing measures.

Entertainment insurance typically covers property and casualty risks to productions and live events. It can include physical risks for cast, crew, wardrobe, sets and equipment; and coverage for extra expenses associated with a production delay caused by those physical risks. Liability also represents a key entertainment cover: for instance, at events where an organizer will need cover for injuries to performers and audience members.